RIP Kathy Ainsworth- The FBI, ADL, and Meridian Police Have Blood on Their Hands 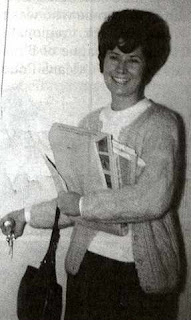 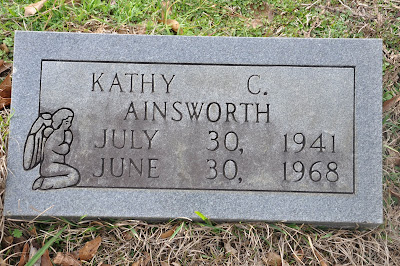 Kathy Ainsworth (born Kathryn Madlyn Capomacchia July 31, 1941 - June 30, 1968) was a Mississippi fifth grade school teacher and Ku Klux Klan bomber killed by a paramilitary police squad in a FBI-ADL death trap.[1] Ainsworth and her companion Thomas Tarrants were both members of the White Knights of the Ku Klux Klan, one of the most militant white resistance organizations during the Civil Rights era. On September 18, 1967 the couple bombed Temple Beth Israel in Jackson, Mississippi.[2] Their bombing target on June 30, 1968 was the home of Meyer Davidson, the Anti-Defamation League (ADL) leader in Meridian, Mississippi.


Kathryn Madlyn Capomacchia was born to Antonio Capomacchia and Margot (Margaret) Marshon in Chicago, Illinois on July 31, 1941. Her father was of Italian background and her mother Hungarian. Both of her parents were entertainers; her father performed as a circus juggler and her mother a dancer.[3] The family, which included an older brother, settled in Miami, Florida. Her parents were divorced.
Kathy attended Coral Gables High and graduated with honors.[4] After graduation she attended Mississippi College in Clinton, Mississippi. There she became acquainted with a professor, Dr. W. M. Caskey, who was also an adviser to the state’s segregationist Governor, Ross Barnett. In class, Dr. Caskey would discuss the racial situation and the threat from “outside agitators.”
In August 1967 she married Ralph Ainsworth, a manager of two health clubs. The couple honeymooned at Gerald L. K. Smith’s tourist attraction and religious theme park Christ of the Ozarks.

Kathy Ainsworth was a member of the Americans for the Preservation of the White Race in Jackson, Mississippi and spoke frequently at their rallies. An APWR spokesman said Ainsworth "tried to teach her students true Americanism and firm Christian beliefs."[5] She also had membership in three different Klan organizations. In addition to the White Knights of Mississippi, she held membership in the United Klans of America (Alabama) and the Original Knights of the Ku Klux Klan (Louisiana).[6]

In Mississippi, local Jews were the victims of a series of recent Klan bombings. In response the B'nai B'rith and the Anti-Defamation League began to raise several thousand dollars to pay informants willing to betray the bombers. Meridian police chief C. L (Roy) Gunn, who himself was on the Klan hit list, asked if the ADL would object to using the money to "to purchase bodies and not testimony."[7] One of Gunn’s sergeants Lester D. Joyner formed a blackshirted commando squad called "Joyner's Guerillas" and had been waging their own private war against the Klan by firing into Klansmen’s homes at night and detonating explosives on their lawns.[8] Adolph I. Botnick regional director of the ADL in New Orleans helped in raising the money among the Jewish community and worked with the FBI and Meridian police in setting up the death trap.[9] Botnick who worked with four others in the original planning said in an interview with the Los Angeles Times, "We were dealing with animals and I would do it again."[10]
The FBI found two Klansmen, brothers Alton Roberts and Raymond Roberts, who were willing to cooperate.[11] Alton Roberts was out on appeal from the conviction of murdering the three famed civil rights activists in Philadelphia, Mississippi in 1964. On June 19 the Roberts brothers approached Danny Joe Hawkins--who helped Tarrants in the bombing of the Meridian synagogue on May 26--and convinced him the next target should be ADL head Meyer Davidson. Davidson led a drive to raise $75,000 for information on the bombing of the synagogue.[12] Hawkins decided not to participate suspecting he was under surveillance. Kathy Ainsworth at the last minute agreed to help Tarrants with the next bombing.
On June 30, 1968, Kathy Ainsworth and Thomas Tarrants drove to the home of Meyer Davidson planning to place the bomb on his front porch. The FBI had moved the Davidson family out of their home earlier and occupied the house across the street as a command post with 8 to 10 agents.[13] That night 12 members of "Joyner's Guerillas" wearing black polo shirts were hiding in the bushes across from the Davidson home.[14] Reporter Jack Nelson was later told by police their objective was to kill Klan bomber Thomas Tarrants, "We had in mind killing him, I don't mind telling you."[15]
Ainsworth remained in the car as Tarrants approached the ranch-style yellow brick home on 29th Avenue. He carried a box containing 28 sticks of dynamite wired to a clock set for 2 a.m. The police opened fire with a hail of gunfire reminiscent of a scene from the 1967 film, Bonnie and Clyde. Ainsworth died, shot through the neck as she leaned over to open the door for Tarrants. Tarrants was hit 19 times but survived.[16]
At the time of her death Kathy Ainsworth was a fifth grade teacher at a segregated Citizens' Council elementary school in Jackson, Mississippi. She was three months pregnant and did not apply to renew her contract at the school.[17] Kathy Ainsworth is buried in Magee, Mississippi.[18]

The Roberts brothers received $36,500 in payment from the FBI.[19] Also a FBI agent who acted as intermediary received $2,000.[20] No grand jury was ever called to look into the involvement of the Meridian police or the role played by the FBI and ADL.[21]

Kathy Ainsworth has been mentioned in conspiracy theories involving the assassinations of Robert F. Kennedy and Martin Luther King, Jr. Some have speculated Kathy Ainsworth was the girl in the polka dot dress who Sirhan Sirhan saw before he shot the senator.[22] Robert Kennedy as US Attorney General was instrumental in integrating the University of Mississippi in 1962 by sending in Federal Marshals and placing the University under military occupation.
In the King assassination, the mother of Kathy Ainsworth said her daughter and Tarrants were in Memphis, Tennessee April 4, 1968 the day King was shot and played a role in jamming police communications.[23]

Just three days in, and Joe Biden is marching us straight towards progress. LA Times : The FBI and local authorities are investigating the e...