SPLC admits it has no proof after pushing outrageous claims about Dothan, AL police

On December 2nd, the Southern Poverty Law Center began promoting a story that over twelve Dothan, AL cops have been planting drugs on black men for years. By the next day, major media outlets were denouncing the story as fake.
The SPLC, which has a staff of over 75 people and budget of over $25 million a year, was forced to admit that the had zero evidence that the story was story. The SPLC failed to do even the most rudimentary fact checking before blasting the fake story out on their website and twitter accounts.
Now the SPLC has deleted multiple statements on twitter. It appears that the notorious SPLC “Hatewatch Blog” is still hyping the story as being true as of 10:00 AM December 4th. This is actually the second big SPLC scandal in three months that involves fake allegations against police. The SPLC sued the Polk County Sheriff’s department and was then ordered to reimburse the department $130k in legal expenses. The judge found that their case had no merit.
From Stop-Hate-Crime.com…

“Leaked documents reveal Dothan, Ala., police planted drugs on young black men for years.” Southern Poverty Law Center [SPLC] December 2nd, 2015
Left-wing websites have been buzzing about a claim that over twelve Dothan, AL police officers framed innocent black men. The officers allegedly planted drugs on innocent black victims for years.  Most cited the SPLC as their source. The SPLC pushed the allegation on their website and on their twitter account.
Now the SPLC has been forced to admit that their accusations are totally without merit. The websites of the Montgomery Advertiser, Dothan Eagle, Washington Post, and Slate.com have all blasted the SPLC for spreading a hoax! A humiliated SPLC spokesman confessed to reporters that they have not seen the alleged documents and that “we have no information to substantiate … claims.”
SPLC employees immediately scrubbed a bunch of odious tweets that pushed the false claims. However, currently the SPLC website still contains a statement saying that the fake story is true.
…
Last October a Florida judge ordered the SPLC to pay $130k to the Polk County Sheriff’s Department for filing a frivolous lawsuit. The Judge slammed the SPLC writing that the group used ““untrue, heightened, and emotional language . . . to conceal their lack of a case.” 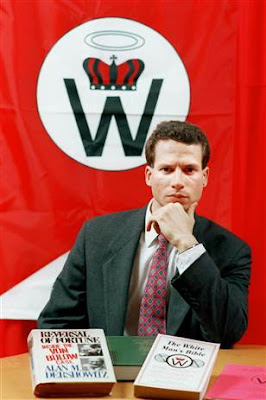 Friends and supporters of Rev.Matt Hale. I received a call from Matt and he would like for you each to order his book,Ending White Slavery. Those of you that would like to testify during his trial (Civil Suit) to support him and Creativity,write to Matt with your name,address and phone number. Also,he wants you to call the prison at: (719-784-9464) and ask to speak to the warden,his name is B.True. Matt wants you to complain about M.Thompson's mistreatment of Matt. He is sending letters back to you and to me saying security risks,gang related activity,etc.. It's about punishing Matt because he filed a civil suit against the prison and the Federal Bureau of Prisons. If you care about Matt and Creativity,you will help.We need your help. Ms.H

Commentary — The following article from the Times of Israel gloats over the decision made in a Belgian court to lock up France’s most popular commedian for the crime of “anti-semitism.” That’s right, it is illegal in Europe not to love Big Zio-Brother. And unless we turn things around awfully quickly, that:s how it will be in the United States too!

Controversial comic Dieudonne M’bala M’bala arriving at a Paris courthouse, March 12, 2015. (AFP PHOTO / LOIC VENANCE)
BRUSSELS — A Belgian court sentenced controversial French comedian Dieudonne Wednesday to two months in jail for incitement to hatred over alleged racist and anti-Semitic comments he made during a show in Belgium, a lawyer said.
Dieudonne M’Bala M’Bala, who has faced similar court cases in France, was also fined 9,000 euros ($9,500) by the court in the eastern city of Liege, said Eric Lemmens, a lawyer for Belgium’s Jewish organisations.
He was not in court for the verdict.
The judgment “says that all the accusations against Dieudonne were established — both incitement to hatred and hate speech but also Holocaust denial” relating to a show in Liege in 2012, Lemmens told AFP.
“For me this is more than satisfying, this is a major victory,” he said.
Earlier this month the European Court of Human Rights ruled against Dieudonne in a separate case, deciding that freedom of speech did not protect “racist and anti-Semitic performances.”
Dieudonne was protesting a fine he received from a French court in 2009 for inviting a Holocaust-denier on stage. He was fined 10,000 euros ($11,000) for what that court referred to as “racist insults.”
In March, a French court also handed Dieudonne a two months suspended sentence and fined him heavily for anti-Semitic remarks after he caused uproar by suggesting he sympathized with the attacks against satirical magazine Charlie Hebdo and a Jewish supermarket in Paris.
“I feel like Charlie Coulibaly,” he wrote on Facebook, a play on the slogan “Je suis Charlie” that became a global rallying cry against extremism and Amedy Coulibaly, one of the attackers.
The performer, who made his name in a double act with Jewish comedian Elie Semoun, is infamous for his trademark “quenelle” hand gesture that looks like an inverted Nazi salute but which he insists is merely anti-establishment.
French courts have hauled him up over a string of comments which opponents say are bluntly racist while supporters champion his right to free speech.
Dieudonne, who can appeal the decision, was not immediately reachable for comment.
at December 07, 2015 1 comment: 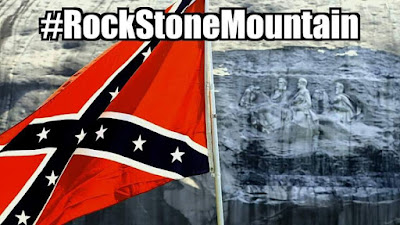 Press release: for immediate release:
“Rock Stone Mountain Rally Scheduled For April 23rd”
In recent months the “Black Lives Matter” radicals have made it clear that the interests of their own people are more important to them than the interests of our nation as a whole, or of the interests of law and order and the judicial process, or indeed of the interests of any people within the United States other than their own racial group.
They have staged mass protests, rallies, riots, and lootings in advancement of their racially driven cause. All the while, violent and specifically targeted, racially motivated Black on White crimes, purposefully underreported by the controlled mainstream media with its liberal anti-White agenda, continue to grow, and the White body count rises.
Along with federal government programs, actions, and inactions across the board concerning issues as diverse as illegal immigration, the influx of dubiously designated “refugees”, and affirmative action combined with overzealous political correctness, have collectively been committing what is, according to the United Nations definition of the term, the genocide of the founding White people of our nation.
If the replacement of Tibetans by Chinese is genocide, then so is the replacement of persons of European ancestry in our nation. Whether accomplished by bayonet or by ballot box, the effect is the same: the disenfranchisement and cultural and genetic dissolution of the descendants of our Founding Fathers, for whom they declared they were establishing this nation ‘to secure the blessings of liberty’, and whom they just as specifically designated as the sole heirs of the right of citizenship herein.
For decades the symbols of the Confederacy, such as the battle flag and the various monuments to its heroes, have grown from holding an originally more strictly regional significance, to representing the loyalties and aspirations of Whites across our nation and around the world. Since the more recent attacks on those symbols and that heritage have begun to increase in vitriol, so have their popularity among patriotic Whites who oppose thought control and politically correct opinion enforcement.
In response, therefore, to the racially motivated attacks on our people, our culture, our heritage, and their symbols, White patriots from across the United States and around the world will be gathering at Stone Mountain, Georgia, on the morning of April 23rd, 2016. This peaceful, nonpartisan gathering of like-minded concerned citizens will promote the idea that Whites have a right to live, and without fear; and to secure the existence of our people, and a future for White children.
Over all, we have the right to declare as forcefully and vocally as anyone from any other perspective that “White Lives Matter”. We will do so, as long as the first amendment continues to protect that right. We invite the press to join us in documenting this event, and reporting on it. Further media inquiries and follow-up questions may be submitted to Billy Roper, one of the event promoters and public relations contacts, via e-mail at roper_billy@yahoo.com.
‪#‎rockstonemountain‬