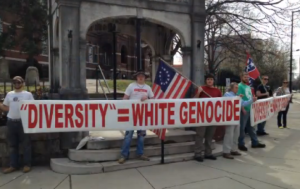 Over at Radix Journal, Gunnar Davey has written a dismissive article on the White Man March.
I’m going to withhold judgment on the movement until it holds a few more events. In the meantime, I attribute most of the mistakes highlighted in this article to inexperience with activism.
There’s plenty of room for improvement in the White Man March. At this point, I am of the view that almost anything would be an improvement over the status quo in the White Nationalist movement. I think the movement needs to shift away from the internet, which has dominated it for the past twenty years, and back toward the real world. I also see more potential in addressing criticism than more Nietzsche essays.
Here are some practical suggestions for the organizers of White Man March 2.0 which is scheduled for April 19th:
1.) Learning From Experience – The flaws of the first White Man March on March 15, which attracted the bulk of the criticism above, are so obvious that the organizers of the next event are well positioned to improve on their previous outing.
- Don’t wear masks in public while holding a “Diversity = White Genocide” banner. This fatally undermines your moral message and sends a signal to the public that even you believe that your message is morally illegitimate.
- Don’t post stickers in toilet stalls and upload them to event threads on the internet. The only thing this accomplishes is inviting mockery. There are much better targets in public places for stickers than men’s restrooms. The League has posted SECEDE stickers in all kinds of public places all over the South.
- Don’t allow uniformed groups to hijack your event. This will inevitably invite harsh criticism from within the movement. Stick to business casual at public events. Avoid creating unnecessary distractions with flags and attire.
- The “Diversity = White Genocide” banners that were used in the White Man March were clearly visible, but some of the signs that were used by activists were homemade. I’m not sure how these banners are being distributed to WMM activists, but there is no reason why the signs can’t be improved by having them designed by companies like VistaPrint orSigns on the Cheap and distributed in the same way.
Of the previous White Man March events than I have seen, the one in Knoxville strikes me as the best done and should be the model for the next event. Even here, there is some room for improvement in the filmmaking department.
2.) Event Control – This was a problem at the previous White Man March and seems to have been caused by a lack of experience, organization, and coordination. It is mainly due to hosting a global event, which is something that I would not recommend, that was open to any White Nationalist to participate at any location of their choosing.
Here are some recommendations:
- Create a Facebook event for official White Man March locations. Set the privacy settings to “Friends of Guests” or “Invitees Only.” Plan your event well in advance. Make sure your activists are all on the same page well in advance.
- Have a point man in charge of each official location – Knoxville, Harrison, Olympia, etc. – and charge them with the responsibility of enforcing a general set of guidelines. Make sure you have a designated spokesman to talk to the media.
- If you want to hold a roadside demonstration like in Knoxville, don’t do it unless you have a minimum of five people. You will also need someone with a camera and video camera to take photos and video of the event.
3.) Messaging – Personally, I believe “Anti-Racist = Anti-White” is more effective and less hyperbolic than “Diversity = White Genocide.”
I also think that spreading this message in the real world with billboards, roadside demonstrations, and hanging banners from overpasses generates much more publicity and is a lot more effective – particularly when you stand behind your message in public, shoulder to shoulder, with other pro-Whites like in Knoxville – than spamming “The Mantra” in internet comment sections.
4.) Yard Signs – If you are going to deploy yard signs for the White Man March, it needs to be centrally coordinated to ensure the event stays on message. Set up a PayPal account. Raise money. Design your signs through VistaPrint or Signs on the Cheap. Order the signs. Distribute them to your activists like the banners.
5.) Large Metro Areas – If you are going to participate in the White Man March, you need to understand beforehand that the reaction that you will likely get from the public will vary tremendously depending upon your location.
The so-called “anti-fa,” for example, are much stronger in large metro areas like Portland, New York City, Chicago, and Washington, DC than in small and mid-size towns like Harrison, AK or Florence, KY.  They’re much stronger in the Northeast and West Coast than in the South, Midwest, or Interior West.
at March 28, 2014